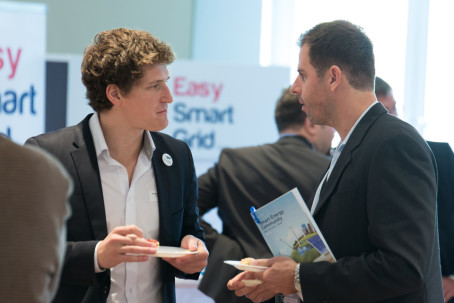 The European innovation network EIT ICT Labs presents 20 startups from 7 European countries at this year’s CeBIT. In order to bring them together with more investors and potential partners EIT ICT Labs partners with the European Enterprise Network (EEN). The startups will present themselves at the CODE_n contest, the Future Match platform, at the newly set-up startup-hall Scale 11 and on stage of Future Talks in two special InnovationSlams. In total, the pan-European organisation that is financed by the European Institute of Innovation & Technology (EIT) supports 147 young companies in a special accelerator program that is focussed on internationalisation within Europe. 24 of those startups were newly integrated into the program in 2014. They succeeded against 790 applicants in the Europe-wide EIT ICT Labs Idea Challenge, a contest for early-stage startups that has been launched at CeBIT 2014.

New cooperation with European Enterprise Network (EEN)
After some first joint projects at Mobile World Congress in 2014 and 2015, EEN and EIT ICT Labs now launch a Europe-wide cooperation. Both organisations will sign a Memorandum of Understanding in Hall 9 at the booth of EEN on March 17th – where the Future Match will take place. EIT ICT Labs supported founders will benefit from the special networking program at CeBIT 2015. Already prior to the fair, the startup teams managed to arrange meetings using the special online matchmaking platform of EEN.

CODE_n, RWE Pitch & InnovationSlam
Also on the numerous stages of CeBIT, visitors and investors can find startups of EIT ICT Labs’ Business Development Accelerator: The Dutch company Athom and the Belgium startup Waylay are listed as finalists at the contest CODE_N. The German Idea Challenge 2014 winner ICE Gateway (category: Smart Energy Systems) will battle at the RWE pitches at Scale11.
On CeBIT-Thursday and –Friday 13 international founder teams will compete with each other at the Future Talks in a special InnovationSlam in hall 9 starting at 2pm. Among them are further winners of Idea Challenge 2014, like 3yourmind (Cyber Physical Systems), Sentryo and Chino (Cyber Security & Privacy), NNGC (Smart Energy Systems) or Testfabrik (Future Cloud).
About EIT ICT Labs Idea Challenge
EIT ICT Labs Idea Challenge is a pan-European startup contest that has been launched at CeBIT 2014 in order to support innovation and entrepreneurship in Europe. In 201, in total 790 European startups applied in 8 categories. 24 winning teams were awarded with about 700,000 Euro of prize money. Furthermore, they were enrolled into the EIT ICT Labs Business Development Accelerator and got access to the biggest European innovation network with more than 120 partners. Through the integration into the eco-system the winners have the additional chance to qualify for further initiatives within the network.
For more information please visit http://ideachallenge.eitictlabs.eu

About EIT ICT Labs
EIT ICT Labs is a pan-European education and research-based innovation organisation founded on excellence. The mission of EIT ICT Labs is to drive European leadership in ICT innovation for economic growth and quality of life. EIT ICT Labs is a Knowledge and Innovation Community of the European Institute of Innovation and Technology. By linking education, research and business, EIT ICT Labs empowers ICT top talents for the future and brings ICT innovations to life.
The ecosystem is characterised by an open and collaborative way of working with partners representing global companies, leading research centres, and top ranked universities in the field of ICT. Since 2010, EIT ICT Labs is consistently mobilising talents, ideas, technologies, investments as well as business across Europe and beyond.