Home Letture consigliate The Next America: Boomers, Millennials, and the Looming Generational Showdown 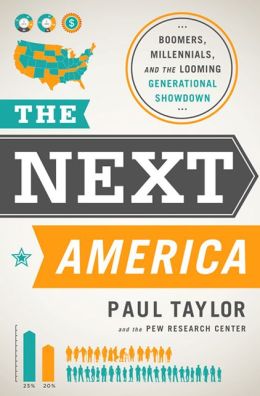 The Next America: Boomers, Millennials, and the Looming Generational Showdown is a new book by Paul Taylor and the Pew Research Center.
The America of the near future will look nothing like the America of the recent past.

America is in the throes of a demographic overhaul. Huge generation gaps have opened up in our political and social values, our economic well-being, our family structure, our racial and ethnic identity, our gender norms, our religious affiliation, and our technology use.

Today’s Millennials—well-educated, tech savvy, underemployed twenty-somethings—are at risk of becoming the first generation in American history to have a lower standard of living than their parents. Meantime, more than 10,000 Baby Boomers are retiring every single day, most of them not as well prepared financially as they’d hoped. This graying of our population has helped polarize our politics, put stresses on our social safety net, and presented our elected leaders with a daunting challenge: How to keep faith with the old without bankrupting the young and starving the future.

Every aspect of our demography is being fundamentally transformed. By mid-century, the population of the United States will be majority non-white and our median age will edge above 40—both unprecedented milestones. But other rapidly-aging economic powers like China, Germany, and Japan will have populations that are much older. With our heavy immigration flows, the US is poised to remain relatively young. If we can get our spending priorities and generational equities in order, we can keep our economy second to none. But doing so means we have to rebalance the social compact that binds young and old. In tomorrow’s world, yesterday’s math will not add up.

Drawing on Pew Research Center’s extensive archive of public opinion surveys and demographic data, The Next America is a rich portrait of where we are as a nation and where we’re headed—toward a future marked by the most striking social, racial, and economic shifts the country has seen in a century.

Paul Taylor is a senior fellow at the Pew Research Center. He is the author of The Next America, a new book examining generations and the country’s changing demographics. Taylor previously served as the center’s executive vice president, where he oversaw demographic, social and generational research. From 1996 through 2003, he served as president and board chairman of the Alliance for Better Campaigns. Before that, he was a newspaper reporter for 25 years, the last 14 at the Washington Post, where he covered national politics and served as a foreign correspondent. From 1992-1995, he was the Post’s bureau chief in South Africa and reported on the historic transformation from apartheid to democracy. He also covered four U.S. presidential campaigns. Taylor is also the author of See How They Run (Knopf, 1990) and co-author of The Old News Versus the New News (Twentieth Century Fund, 1992). He twice served as the visiting Ferris Professor of Journalism at Princeton University, in 1989 and 1995.  He graduated in 1970 with a bachelor’s in American Studies from Yale University. Taylor has lectured at numerous colleges and frequently discusses Pew Research studies in print and broadcast media.